An extreme example of overlexicalization in anti-Muslim reporting came after the murder of 60 tourists at Luxor. Richardson shows how subsequent reporting, which tied international terrorism to the suspicion of Muslim terrorists harbored by Britain, created a lexical equivalence so that '''Islamic terrorists' are 'Islamic militants' are 'Islamic radical exiles' are 'Islamic asylum seekers''' p.

Richardson ends the chapter by reviewing some ''positive'' stories that appear during this time period, which depart from the normalized representation of Islam vs. The reporting of Iraq covered in Chapter 6 illustrates the systematic limitation of options presented during wartime news coverage.

Perceptions of Islam in Western Publics

Journalists limit the space of the discussion by not entertaining any non-war options; ''a discourse dominated by propaganda will consequently only allow for two positions: for and against'' p. Richardson lays out the ''discursive strategy'' created through a set pattern of assertions and presumptions.

He indicates elements which were not reported, as well as those that were only selectively reported, such as UN decisions that agreed with Britain's perspective. Richardson focuses on the lexical and syntactic structures employed by press writers to reinforce the ideological square identified in previous chapters. The ''other'' is represented simply as ''Iraq'' or ''Saddam'' or the ''Iraqi dictator'' while ''we'' are represented by a large number of collective representations ''America'', ''Washington and its allies'' and by a litany of individuals with their full titles almost always given.

Aggression against Iraq is mitigated through syntactic removal of agency, often through passivization or nominalization of the action. Metaphorical expressions are used to present Iraq as subordinate, thus legitimizing its punishment at the hands of the parent or authority figure, the West. Western military action is often backgrounded, while Iraqi action is foregrounded. Lexically, the West ''warns'' and Iraq ''threatens. Chapter 7, ''Conviction, truth, blame and a shifting agenda: the reporting of Algeria'', examines not just the effect of anti-Muslim news stories on society, but also the role of external factors in shaping how events are represented in the press.

Richardson points out that the reporting of Algeria during the time period studied was dominated by stories of violence, with the blame for the violence shifting between the Algerian government and groups labeled as ''Muslim terrorists.

Prior to investigative reporting conducted in Algeria, the blame is placed on Muslims. But during periods of time when the British press had journalists in Algeria, the journalists saw direct evidence of the Algerian junta's agency in the massacre of Algerian civilians, and identified them in their reports as the aggressors. One journalist, after spending time in Algeria predicted, ''And with documentary evidence that thousands - some say as many as 12, men and women - have been 'disappeared' by a government that claims to be fighting 'international terrorism', Algeria's military-backed government will find it hard ever again to win sympathy in the West'' p.

However, in subsequent months most of the British press returned to its reliance on government-controlled Algerian press as their source, and therefore shifted the blame back away from the government. The Financial Times did not follow the shifting pattern, instead reporting items such as the call for an investigation of the role of the government in the massacres, and the importance of Algeria to international oil interests.

Richardson concludes, ''Faced with massacres in a Muslim country; given the 'choice' between apportioning blame for such crimes to 'Muslims' or a military backed government It draws on a number of critical theories, and explains them with enough detail to be readily understood to those who are new to the field. It is also an excellent model for Critical Discourse Analysis. Examining both linguistic and social factors, Richardson combines qualitative and quantitative analyses to bring to the foreground the underlying ideological biases that run throughout the corpus studied. 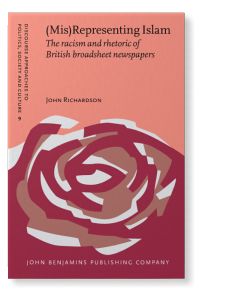 This work is remarkable for its depth of analysis, and the extensive research conducted provides the basis for scrutiny not only of what is reported and how it is reported, but also what is consistently left out. The topic is one that has received scant attention up until now in the linguistic community, as the area of anti-Muslim discrimination and its role in newspaper reporting has been largely neglected. By reporting on both broad trends and case studies, and by providing evidence for both the effects of the elite press on a minority community and the effects of social situations on the printed news, Richardson makes a strong case for the interaction between language and social power.

The context in which stereotypical frames are produced and reproduced intertextually is made clear, as the prejudicial presuppositions required to understand the news are made explicit. The argumentation is clearly and logically thought out; however, the presentation of the data in the various charts and graphs is often confusing.

The abbreviations used in data displays are sometimes ill defined. In particular, columns showing percentages do not always describe clearly what the numbers represent.


Search Close. Advanced Search Help. The combination of post-communist and post-conflict transition, together with the current economic and financial crisis, pose difficult challenges for the Western Balkans. What is the state of democracy in the region? Are the countries of the Western Balkans stuck somewhere between authoritarianism and genuine democracy? What are the remaining obstacles to state building? What effect has the crisis had on young people in the Western Balkans? These are some of the questions the authors of this volume seek to answer.